The journey from a Reference Video to your Video

In the following case study, I speak about the process from starting with a Reference Video to  producing a film on that basis. Reference videos are a very common tool in corporate videos and promotional videos. 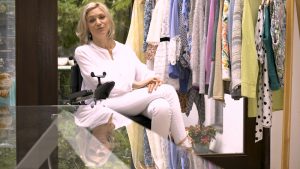 It allows the video filmmaker to understand what the client expects and where he/she wants to arrive, but as the following shows, the outcome is by far not certain and may be not even desirable.

I have recently finished a promotional video for a client who wants to set up a Social media video channel. The client is already on Instagram. Her name is Heidi Herkes. (@heidiherkes) I don’t want to tell you too much, because that’s what the promotional video is about, but at this point I need to mention that she has been in a wheelchair for about 4 years after an accident and her channel is about disability and fashion. (The video can be seen at the end of this text.)

Heidi had a pretty good idea of what she wanted to tell in the video. She wrote the text she wanted to present. This text you can hear in the video is almost what was written in the first place. She also found a reference video. It is an introduction video by French fashion designer  Justine Leconte from Berlin.

When I saw the reference video, I was immediately excited about the project.

The first step was of course to analyse what makes the reference video so interesting:

This was the basis. When Heidi sent over her off-text script, I realised that the tone was different. Also the content differed. Justine just hints in the beginning that there was something that initiated her design career. Heidi goes more into depth  by explaining what it meant for her to promote fashion as it is her very personal story. I started to wonder whether it makes sense to follow the concept of abstract space as the channel is not about forms, shapes, colours, but about life. Here, fashion isn’t a purpose in itself, it’s a purpose for living.

At this point I advise you in case you haven’t done it already to have a quick look at the reference video and the final ‘product, which you find at the end of this text.

I still was considering to use cut out for some shots, though. The question was what material we could get to illustrate what Heidi is going to show in the youtube channel. Justine seemed to have already material available from year one. Heidi is just beginning with her video channel.

So, we agreed to shoot on one afternoon in a fashion store in Muswell Hill. We also wanted to have shots outside on the streets. Muswell Hill was chosen as it is close to where Heidi is living – and as it is a nice spot in London – and offers great views on the town.

Heidi brought a friend, Kirsty, along. The idea was to show how Heidi advises in terms of fashion. Some nice shots arose out of this as both acted accordingly, which produced some very natural looking footage.  To mask this in order get cut outs would have been a waste of the nice footage. I anyway used what was available in the foreground out of focus, so it has the function of a  cut out.

Another day, we shot in Heidi’s flat and workplace. When I arrived I was still playing with the idea to create shots in a more abstract space. The bright flat however turned out to be quite stylish itself and Heidi wanted to use a larger clothes rack as prop. I tried to have one shot against the white background, but otherwise I changed the strategy and made most advantage of the room.

Heidi also presents the text much more slowly and more relaxed. I also edited in a less pacy way. Instead of hasting from one shot to the other I let it breath.

Heidi found a song called ‘Science and Technology’ form www.hooksounds.com. The title is not very promising, but the music turned out to be the right choice. Originally, I had something more dynamic and upbeat in mind, but there was a reason why Heidi intuitively liked that song.

Heidi fortunately liked the first cut. What you see is almost the first cut, however some  shots were replaced in the following process. Interestingly my only abstract space shot didn’t work as her face was too reddish and there is always a trade off when you do colour correction. Meanwhile, I think it didn’t work stylistically, neither.

Finally, the film was finished. I am happy with the final result and so I believe, so does Heidi, but is this film now like the reference film? For the reasons given above, it can’t be. It wouldn’t have made sense to press for a changed text, a faster speaking or a more abstract studio style. My theory is it’s a journey. The reference video is the starting point and the final film is the end of the journey. But you have to start somewhere and that’s why a reference video is very helpful. If the reference video would have been a different one, we might have ended somewhere else.