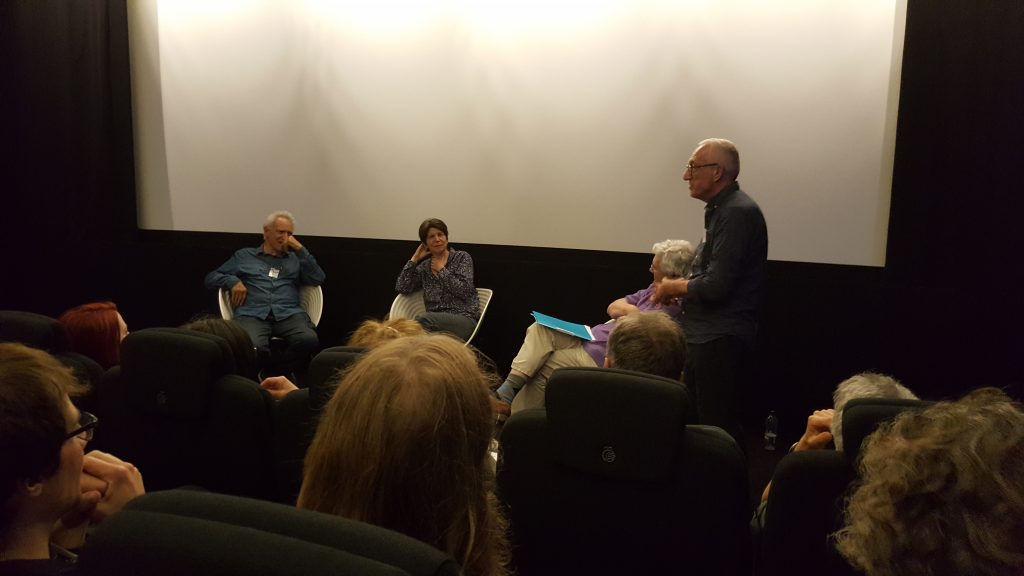 Using the language of images for editing

Last night, there was an industry insider event organised by Sprocket Rocket (https://sprocketrocketsoho.com) run by one of the most successful British editors Mick Audsley featuring Roger Crittenden who introduced the second edition of his book Fine Cuts about European Film Editing. It’s an interview book and so he brought with him two European editor legends he interviewed for this book: Claire Atherton who was editor of Chantal Akerman’s films and Roberto Perpignani who started his career as a 21 year old as editing assistant of Orson Welles. How Roberto came to this engagement, he explained in depth, but I am not in the position to reconstruct the family line that changed the young man’s career path from a painter to a film editor.

Interesting topics were discussed. Claire explained how her editing has been influenced by the image driven Chinese scripture. She is not the only one. Sergej Eisenstein seemed to be influenced by getting meaning out of combining often unrelated images.  Claire didn’t know of Eisenstein’s background. She came to this through her interest in Chinese culture.

Eisenstein’s montage principles seem to have come out of fashion in our visual world as it appears a bit too brainy,  but it is worth to rediscover it. Especially in corporate videos, promotional videos or music videos it can be a very enriching and powerful technique to take advantage of the power of association.  (This is my comment and not what was said yesterday, though.)

Roberto worked on Il Postino. He witnessed how two actors, French speaking Philippe Noiret and  Italian speaking Massimo Troisi acted in their respective languages and still developed a convincing on screen relationship that made Il Postino such a huge success. Of course, how this came together was by having a great script, great direction,  a common passion and understanding and  getting it right in the editing process .

And on the side note by me: How can you better show what the idea of Europe is about?

Roberto also showed a VHS working copy of an Il Postino scene with both actors speaking in their language: Almost B&W, full or artefacts, noisy, grainy, bad sound and bad resolution.  I have a tendency to get a feeling of nostalgia with almost everything – design, technical devices, music, fashion which is older than 20 years. I know it is sentimental and not justified. When seeing this copy, memories of my first filming and editing steps and  frustrations as a result of the bad quality of analogue video returned. I am proud to say that there was no sense of nostalgia and I am so glad to be witness and beneficiary of our digital age.

The three veterans then discussed how to get distance to the material they are editing to be able to re-evaluate it with fresh eyes as there could be the risk to kill too many darlings.

Claire Atherton had a very good advice: Forget what you have done to be able to rediscover again. Maybe editing is one of the few jobs where having a bad memory is a good thing. Having said this: The veterans had quite a few very detailed anecdotal stories to tell.

By the way: On the photo you can see the European veterans all together: Roberto Perpignani,  Claire Atherton,  Roger Crittenden and Mick Audsley.